What’s Ahead? NPI Services Weighs in on #NextList 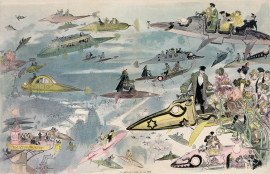 NPI Services, Inc. serves innovation by providing services for high quality PCB prototypes using up-to-date technology and standards. In addition to the content on our company website, NPI Services’ Linkedin, Facebook, Twitter, YouTube, and Google+ pages feature industry news pertinent to the current variety of prototyping and production needs of our clients. But tomorrow’s innovations often spring from today’s advancements in technology and science, so our social media also frequently feature discoveries likely to lead to future innovations, especially those that show promise for improvements in world health and wealth.

A few days ago, General Electric (GE) launched an epic marketing campaign called Next List to engage people to share online their visions of the future. The campaign gives a big nod to the late Isaac Asimov, who wrote a famous response to the New York World’s Fair of 1964. Asimov visited GE’s pavilion which featured scenes from 1900, 1920, 1940, and 1960, showing how electrical appliances brought changes to the way people lived. Asimov “enjoyed it hugely and only regretted that they had not carried the scenes into the future,” then proceeded to take a “guess” what life would be like fifty years hence, that is, right now in 2014. (Interestingly, GE’s pavilion attraction became Disney’s Carousel of Progress which did include “future” scenes, in five revisions from 1967 to 1993. The attraction currently resides in Florida, having spent its youth in Anaheim from 1967 to 1973.)

Using the hashtag #NextList, consumers will weigh in on how they envision techology in 2064, fifty years from now. GE’s marketers will aggregate the predictions, forming a picture of what visions of the future have best captured the collective imagination. Says GE’s manager of global marketing Sydney Williams, “The anniversary represents an opportunity to once again look forward and envision a world elevated by innovation. The Next List represents the company’s major research and development focus areas across healthcare, energy, software and manufacturing…”

By revisiting NPI’s social sharing, mainly Twitter tweets and Facebook (FB) posts, a vision of the future emerges. First, “everyone in the world” will be connected, jump-started by Facebook co-founder Mark Zuckerberg’s campaign to get inexpensive basic Internet service to them, featured in his 2014 Mobile World Conference Keynote Address, the live stream of which was the subject of an NPI tweet, retweet, and FB post on 24 Feb 2014. Bandwidth? No problem, thanks to Caltech’s really huge new laser technology breakthrough (story on NPI FB and Twitter), findings originally published online in the Proceedings of the National Academy of Sciences, week of 10 Feb 2014. With everyone and everything connected in the Internet of Things, resource sharing for transportation and other services will be nearly universally available.

Polio will have long been eradicated (that should have happened by now, really), but many new vaccines for other diseases will have been developed, some of them so-called Goldilocks vaccines, required to be kept not too hot, not too cold, but “just right.” These vaccines and other biologic material requiring “just right” storage, will have reached their “last mile” locations safely carried in special insulated containers with ice created in solar thermal coolers, as demonstrated in a Sandia Labs News Release on 25 March 2014, and shared with NPI followers. This will have resulted in the eradication of many diseases that now cause so much suffering. Health will have benefited by a revolution in diagnostic tests such as early and inexpensive detection of sepsis, even in the field by a minimally trained user using a digital microfluidic device such as the Spero Diagnostics project at UC Irvine’s Samueli School of Engineering, featured in an NPI blog on 17 June 2014. Trials for new drugs or effects of other chemicals will be without risk to people, because they will take place on Humans-on-Chips, as featured in NPI’s 21 Mar 2014 modified retweet of Livermore Lab’s story in Science & Technology Review. Biologic 3-D printing will bring healing and repair to tissues and organs, and create advanced prosthetics. Check out the life-saving 3-D printed beak for “Beauty” the Bald Eagle, retweeted 20 Jun 2014.

Global energy problems will have been eased by a matrix of sustainable solutions. Off-grid lighting, device-charging, and household power will be universally and economically available, eliminating the expense, fire and inhalation hazards of household kerosene use (to see stories, Google-search “NPI Services Kopernik d.light”). Solar stoves, using molten-salt storage (story on NPI’s FB 26 Dec 2013), will provide off-grid cooking without fuel hazards. On a larger scale, solar power plants with more elaborate molten-salt storage will run for hours after the sun has set! Household power will be available from the sun and wind, such as with a 4-foot high freestanding vertically shafted turbine capable of functioning in low wind speeds, as featured on NPI Services Facebook page yesterday, sharing the story of the 14 Aug 2014 San Diego Inventors Showcase held at the headquarters of Jack-in-the-Box. Fuel cell technology will have advanced to be standard vehicle technology, and used for practical bulk power for off-grid communities (see our Facebook posts 26 Aug 2014 about fuel cells).

Now for climate variation issues. Thanks to UC Davis findings as shared by NPI on FB 26 Mar 2014 documenting the climate-controlling cycles of sea birds, krill, and plankton in the southern oceans, efforts to promote seabird populations will have resulted in global temperature regulation. Polar ice and glaciers worldwide return to mid-twentieth century levels. (If that seems too simple and far-fetched, read the article, and turn a globe upside-down to get an idea of what a huge part of the earth is involved!)

What about electronics? Well, they’re everywhere, in everything, worn and implanted in anyone who needs or wants them, and on almost any shaped surface, or material, and they never stop talking! Current events in electronics are so prevalent, and so shared in social media by everyone involved, including NPI Services, that it is an assumed part of the Next List, Advances in materials, manufacturing processes, and electronics technology are what make this future vision. Sensing, controlling, communicating, monitoring, alerting, enabling research.

Sharing vision for the future is something NPI Services has included in its online voice for some time now, well before General Electric invited us and you to do so. View NPI Services, Inc. on Twitter, Facebook, Linkedin, Google+, and share your thoughts with us, as well as with the #NextList campaign. Our content varies on each platform, and we’d love to share it with you, so, if you please, “Like” us on Facebook, follow us on Twitter and Linkedin, and add us to your Google+ circles, and of course, visit our website for our blogs, newsletter archives and newsletter signup, and especially for all your NPI and other service needs, to request information and/or quotes for services. Call us today!