“Hats Off!” to NPI Services Inc.’s Unique and Outstanding Clientele! 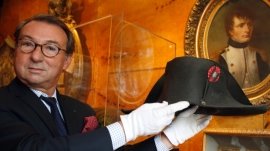 A great business needs great customers, and NPI Services, Inc. has always measured its success in terms of its customers. Customer satisfaction is an obvious benchmark of quality, and our commitment to exceeding our customer’s expectations through fast, personal service with strategic quality and economic objectives has resulted in high marks. But it’s the quality of the customer that is of the essence. Outstanding innovators, entrepreneurs, and industry leaders bring excitement to the work here at NPI Services, and we say, “Hats Off!” to our wonderfully unique and outstanding clientele!

A recent event surrounding a hat illustrates the immense value of being literally outstanding, and how symbols and brands capture the spirit and imagination. At an auction held last weekend opposite the Château de Fontainebleau near Paris, Kim Hong-Kuk, a Korean poultry magnate, paid nearly €1.9M ($2.2M) for a hat worn by Napoleon Bonaparte at the Battle of Marengo. He has since declined an offer to sell it for 30% more. To Mr. Kim, founder and chairman of Harim Group, a company described by The Economic Times as “an empire” which includes poultry and pork processing, animal feed, retail and veterinary medicine, the purchase of Napoleon’s black felted bicorne hat is to “awaken entrepreneurial spirit.” Kim says that “Napoleon’s challenging spirit sends an important message in this era that needs entrepreneurial spirit more than anything else,” and that he is considering putting the hat on public display to share Napoleon’s “spirit of challenge and adventure.”  Be assured Kim Hong-Kuk knows something about entrepreneurial spirit and challenge. Not unlike Napoleon, Kim grew from humble beginnings. The 57-year-old “emperor” of the Harim Group started the business as a teenager with just fifteen chickens!

Napoleon Bonaparte is noteworthy for so many reasons, not the least of which is the innovative way he wore his hat. As the only figure wearing the bicorne sideways, he distinguished his profile, making him stand out on the field of battle. This outstanding visibility made him inspiring to his troops and intimidating to his opponents, who gave him the moniker “The Bat” because of the silhouette of the sideways hat. The crowning glory of the recent auction of Napoleonana formerly in the collection of the royal family of Monaco was one of those iconic hats. This particular hat that Mr. Kim purchased was worn during one of Napoleon’s greatest triumphs, the victory at the Battle of Marengo in 1800. Napoleon then gave the hat to his cavalry veterinarian, whose descendents sold it in 1926 to Prince Louis II of Monaco. The Battle of Marengo inspired the legendary dish “Chicken Marengo,” a story that cannot have escaped the present owner of the hat. Napoleon actually did eat chicken almost daily, and is quoted as saying “an Army marches on its stomach,” so Napoleon’s hat and spirit is connected to Mr. Kim not only in “doing the impossible,” but is also associated with Harim’s core businesses of poultry, feed, and veterinary products.

So, again, “Hat’s Off!’ to you who are outstanding in the field, you innovators, entrepreneurs, and leaders in the technical industry! We are proud to support your triumphs!

P.S. Enjoy a pun-filled photo gallery about the hat by David Mack of BuzzFeed.