No Flux is a Given: Cleaning No-Clean Flux 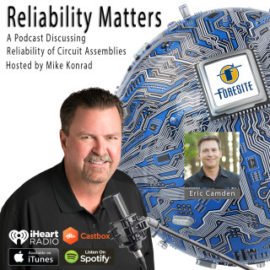 John Osowski and I attended the LA/OC Surface Mount Technology Association (SMTA) 2019 Tech Expo and Forum in Long Beach. As a corporate member, we want to support this great organization and get the word out about NPI’s Orange County based, quick-turn electronic manufacturing services.

NPI Services Inc: Full turnkey electronic prototypes from a single PO! Get a quote within 48 hours!

As you can see from my blatant sales pitch, we were Long Beach’s greatest sales duo since Cal Worthington and his dog, Spot. In 2019, those two are each long gone, but let’s put $99 down and drive off the lot with a pre-owned DeLorean and take a trip 30 years into the past…

1989: Global waves of civil resistance in communist states signal the death knell for the Soviet Union and form the promise of a free and democratic world, Bill Cosby and Roseanne Barr are the titular characters in America’s most popular shows, and the Earth is on the verge of a man-made ice age.

Naturally, when faced with an ecological disaster, all members of the United Nations come together to swiftly and unanimously agree to enact significant change. No, really, it happened!

In 1989, the Montreal Protocol comes into effect, phasing out the use of fluorinated and chlorinated hydrocarbon solvents that are known to damage the ozone layer. Banned are the hazardous vapor degreasers of the era, but from these regulations, an innovation arises no-clean flux. It promises residue that is both invisible and benign.

Fast-forward to the present day, and the state of the electronics industry has changed in ways unimaginable in 1989, but no-clean flux has endured. PCB layouts have become vastly more complicated, components may be measured by the thousandths of an inch, and the distances between the anode and cathode of a transistor have shrunk to as little as 5 nanometers. Contamination can come from any step in the fabrication, assembly, and inspection process, and the complexity of modern boards makes them more susceptible to foreign object damage than ever.

Still, less cleaning is performed today than 30 years ago because, “hey, it says ‘No-Clean’ on the bottle.” No-clean flux should be thought of as “low solids content flux” or “low residue flux.” Low levels of solids considered benign 30 years ago can cause serious issues and may require cleaning today. Ironically, “no-clean” flux is remarkably difficult to clean, especially after reflow. It’s no surprise that spending the time and money to clean flux that is difficult to remove, in order to clear debris that may not be visible to the human eye is unpopular.

The major failure mode caused from residue comes from electro-chemical migration (ECM). This is the movement of metal ions in the presence of electric potential, which forms unwanted metallic crystalline structures known as dendrites (coming from the Greek word for tree, because they look like tree branches. Neat-o!). Anyway, if one of these dendrites were to connect points of different electrical potential, it would cause a short circuit, leading to failures, fires, and all sorts of problems. More insidious, ECM can lead to parasitic drain. Imagine that the dendrite doesn’t fully connect two points of different potential, but instead gets close enough to create a capacitance. That capacitance can drain batteries and cause intermittent failure, which is difficult to identify. The same system may perform well on a rocket launched in the dry cold of a February day in White Sands, NM, but experience unacceptable performance on a rocket launched in the heat and humidity of Cape Canaveral, FL, in August.

To limit moisture, some form of conformal coating is frequently used. Conformal coating is ideal if you drop your phone in a puddle, but it is slightly permeable and does not fully protect from prolonged exposure in a humid environment. Plus, if the PCB wasn’t properly cleaned before the coating is applied, the residue gets trapped inside and becomes nearly impossible to remove. If the PCB is destined for a humid environment, keeping it moisture-free is impractical.

Minimizing current is easy. Never turn it on. Also impractical.

Limiting residue is the final factor. It can be done, but may be time consuming and expensive. To determine how clean is clean enough, consider the following factors:

Working Environment: The same PCB is more susceptible to its failure modes on the deck of an aircraft carrier in than it is in a climate-controlled data center. Consider the end use of your product.

Cost of Failure: If your toaster fails, you’ll have to just eat bread. If an electrical system in an airplane fails, lives can be at risk.

BMW had to perform a partial recall of its all-electric 2018 i3 hatchback due to improper cleaning practices. The car could lose its high-voltage electrical power without warning and would become immobilized. According to BMW, a circuit board “may have not undergone a sufficient cleaning process.” Their solution was a software fix for a hardware issue. If a short was detected, the high-voltage power was immediately cut. Fortunately, power steering and brakes remained, and no one was hurt from their oversight. However, this expensive and embarrassing recall was avoidable. BMW calls itself “the ultimate driving machine” and prides itself with its performance. If they can make such a basic cleaning gaffe, that indicates no flux is a given.

Much of the information in the article was presented in “Why Are We Cleaning No-Clean?” by Mike Konrad at the 2019 LA/OC SMTA Tech Expo. Konrad is the president of Aqueous Technologies in Corona, CA and host of the “Reliability Matters” podcast available wherever you listen to podcasts.